District police stand beside the poor with masks in Gaibandha 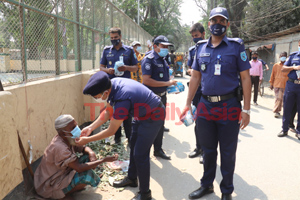 Like the district administration, District police also stood beside the poor with positive attitude and were distributing masks to the poor to face the 2nd wave of corona in the district.

Office sources said all 64 districts including Gaibandha one were brought under 7-day long lock down on Monday to check corona infection.

The members of district police from constables to officers were performing their official duties as per the directive of the higher authority concerned during the lockdown.

they were not only performing the lockdown duties, but also they were motivating the people to use masks to check Corona. They were also distributing masks free of cost to the poor who have no ability to purchase masks.

The law enforcers were also giving the people advice not to go outside unnecessarily during the lockdown period.

Yesterday, a team of district police led by superintendent of police (SP) Muhammad Towhidul Islam visited the important places of the district town and witnessed the activity of his law and order forces during the lock down.

The SP also distributed masks to the poor during the period.

The town elite highly lauded the masks distribution and wearing activity to the poor by the SP and his sincere efforts for the poorto halt the spread of corona pandemic.

Similar activity is being done by the seven thana police led by officers in charge (OCs) at their respective thana, office sources said.