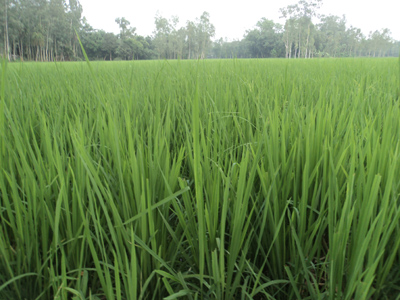 Due to favourable weather condition and timely supply of agri-input, surplus Boro Paddy output is likely in Bogura.

Besides, farmers are growing paddy in the Basin of Jamuna River. The perpetual form of the river is the gully stream but when it is not, when the crops are cultivated by occupying the chest of the waterless river, there is no way to understand by looking at the river whether it is a river or a field of crops.

As part of the river is filled and boro paddy is suitable for cultivation, boro paddy has been cultivated in more than five hundred acres.

More than 8 lakh tonnes of fresh paddy will be produced by land less farmers of the district and its adjacent area this current season as they don’t possess their own land.

Farmer Rafiqul Islam of  Sonatola upazila said he cultivated boro paddy on two hectares of land to produce 200 maunds of boro paddy paying only Tk 55,000 to transplant the sapling. He doesn’t pay extra cost of fertiliser and pesticides, he added.

According to the locals, at one time large launches and ships used to ply the river regularly. But every year the hill slopes come and the river is deeply filled and now the borough has turned into a paddy field.

Deputy Director of DAE Md Dulal Hossain said cultivation boro paddy during dry season makes a new dimension amid the farmers in the district. The farmers could grow extra fresh boro paddy every season, he added.