Dhunte evicted the government road and built a house! 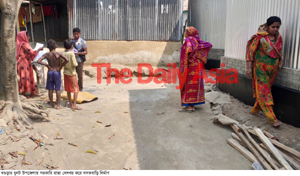 Dhunte evicted the government road and built a house!

Locals have demolished a 100-year-old government dirt road in Bhootbari village of Bogra’s Dhunat upazila and built houses. As a result, the methopath of the locals has been closed. At least five thousand families have been affected by this.

It has been seen on the spot that Bhootbari is a village in Bhandarbari union of the upazila. There is a government road between the houses of Shukur Ali and Abdul Barik in the village. That road is about 10 meters wide. The locals used to come and go to Bhandarbari market, educational institutions and cemeteries through that road. Also the farmers of the area could easily transport the crops from the land using the government road.

Shukur Ali, an illegal occupant, said, “I have built a house without measuring the land a long time ago. But there was a road by the side of the house. People used to move through there. But the road has been closed due to the construction of a house by neighbor Abdul Barik. However, I will give up if the government finds a place on the road. On the other hand, Abdul Barik said, “If Shukur Ali leaves the government road, I will also leave.”

Dhunat Upazila Nirbahi Officer (UNO) Sanjay Kumar Mahanta said the investigation into the allegation was delayed due to his busy schedule. However, necessary action will be taken after a quick investigation.