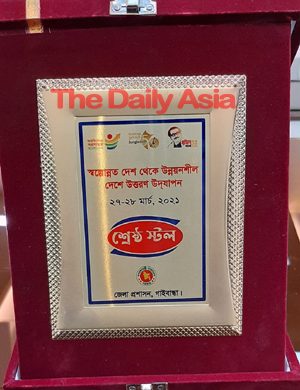 As per the directive of the government Gaibandha district administration celebrated the graduation of Bangladesh into a developing country from the LDCs recommended and evaluated by the United Nations Committee for Development Policy (UN CDP) in the month of February this year.

Marking the graduation of Bangladesh into a developing country from the LDCs, the administration organized two-day long   development fair-2021 on the premises of Independence Square of the district town on March 27, 28, 2021.

In the fair a total of 55 stalls were set up. All the government offices under the various Ministries set up the stalls in the fair under the direct supervision of the district administration.

On the concluding day, the prizes were given to the owners of the stalls.

Based on the gate up, decoration and the visits by the people the stall set up by the department of agricultural extension (DAE)under The Ministry of Agriculture was adjudged the best stall to the 55 ones this year.

Additional secretary of the Cabinet Division, Md. Khalilur Rahman formally handed over the crest to the officials of the DAE on March, 28 as the chief guest.

DC Abdul Matin and other guests thanked the officials of the DAE led by deputy director agriculturist Masudur Rahman for making an attractive stall and adjudging it as the best stall in the fair.

Sub assistant agriculture officer AbdurRab said, this achievement inspired the field level agri officials of the DAE to motivate the farmers to boost production of agri crops to achieve the sustainable food security of the country.