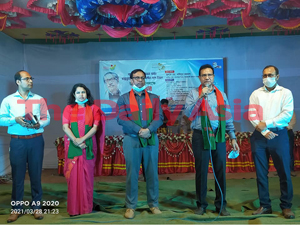 Two-day long development fair ended on the premises of Independence Square of the district town on Sunday with a call to build happy and prosperous ‘Sonar Bangla’ as dreamt by Father of the nation Bangabandhu Sheikh Mujibur Rahman.

The fair was held at the initiative of district administrations to focus and inform the country’s people and students about the development activities of the government, its success and ongoing programmes being implemented by different govt. offices.

To achieve sustainable development goals (SDGs) by 2030 and promote government’s future plans through turning Bangladesh into a middle income country by 2021 and developed one by 2041 are other objectives of the fair, sources said.

A series of programmes were also held during the fair. The programmes included quiz competition, essay writing competition, instant lecture competition, screening of documentary film on the life and works of Bangabandhu Sheikh Mujibur Rahman, prize distribution and discussion meeting.

On Sunday afternoon, a concluding ceremony was also held with deputy commissioner (DC) Abdul Matin in the chair.

The speakers in their speeches said, the country led by Prime Minister Sheikh Hasina has been marching fast towards development.

The country has been graduated into a developing nation from the LDC at the cordial efforts of Prime Minister Sheikh Hasina, they added.

Additional secretary of the Cabinet Division, Md. Khalilur Rahman in his speeches said, the government led by Prime Minister Sheikh Hasina has been working relentlessly since 2009. As a result, the country gained an outstanding achievement for the graduation of Bangladesh into a developing country form the LDCs.

He also urged all to help the government build Sonar Bangla as dreamt by Father of the nation and architect of Bangladesh, Bangabandhu Sheikh Mujibur Rahman.

Later, a colorful cultural function was also held to entertain the people. The artistes of Zila Shilpakala Academy and of the district rendered songs and performed dances in the function.

A large number of people from all walks of life, town elite, district level officials and journalists were present on the occasion.