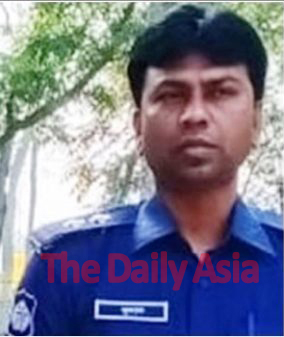 A sub-inspector of Pabna’s Atgharia police station was electrocuted on Saturday night.
The deceased was identified as SI Dulal Hossain, 47, son of late Abed Ali of Hasanpur village of Bagmara upazila in Rajshahi.
The accident took place in the police station ground at around 11 pm on Saturday.
Additional Superintendent of police in Pabna Masud Alam said the police station building was illuminated on the occasion of the Independence Day celebrations. The saluting deacon was also illuminated with steel pipes for hoisting the national flag at the police station premises.
Somehow the steel pipe was electrified due to its leakage. While talking on his mobile phone at night, SI Dulal unknowingly grabbed the pipe with his hand and got electrocuted. He was rushed to the upazila health complex where he was pronounced dead by the on duty doctors.
Meanwhile, senior district police officials rushed to the Atgharia police station after hearing the news of SI death. Public representatives, journalists, teachers and political leaders were present at the time.
He joined the Bangladesh Police Force in 1993. He was transferred two years ago and joined Atgharia police station. He was recently transferred to Sujanagar police station in the same district.