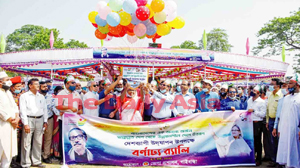 Bangladesh has already graduated into a developing country from the LDCs this year for fulfilling all the three eligibility criteria recommended by the committee for Development Policy of the United Nations (UN-CDP) held during February 22-26, 2021.
To mark the graduation of Bangladesh into a developing country from the LDCs, the district administration arranged the two-day long development fair on the premises of the Independence Square of the district town as elsewhere in the country.
The fair is being held at the initiative of district administrations to focus and inform the country’s people and students about the development activities of the government, its success and ongoing programmes being implemented by different govt. offices.
To achieve sustainable development goals (SDGs) by 2030 and promote government’s future plans through turning Bangladesh into a middle income country by 2021 and developed one by 2041 are other objectives of the fair, sources said.
Whip of the Jatiya Sangshad and local lawmaker Mahabub Ara Begum Gini formally inaugurated the fair through releasing balloons in the sky as the chief guest and deputy commissioner (DC) Abdul Matin was present at the event as the special guest.
Later, a grand rally led by whip Gini was brought out from the Independence Square and ended at the same venue after parading the main roads of the town. A large number of district level Govt. officials, political leaders, students, teachers and cultural personalities including journalists took part in the rally.
The programme was followed by a discussion marking the achievement for graduating Bangladesh into a developing country from the LDCs at the Shadhinata Mancho of the independence square with DC Abdul Matin in the chair.
Whip of the Jatiya Sangshad and local lawmaker Mahabub Ara Begum Gini attended the function and addressed it as the chief guest and superintendent of Police(SP) Muhammad Towhidul Islam, general secretary of district unit of Awami League Abu Bakar Siddique, mayor of Gaibandha Municipality Md. Matlubour Rahman and renowned freedom fighter Goutam Chanda Modak spoke at the function as the special guests.
The speakers in their speeches said, the government led by Prime Minister Sheikh Hasina has been working relentlessly since 2009 and for working sincerely Bangladesh has graduated into a developing country from the LDCs this year.
Terming the graduation of Bangladesh into a developing nation from the LDCs a tremendous and outstanding success for the country they urged all to help the government make the achievement a sustainable and viable.
Later, the guests went round the stalls and talked to the owners of the stalls.
To hold the fair here successfully the district administration had taken up necessary measures and different programmes that include arrangement of reality show, quiz and cultural function, said additional deputy commissioner (General) ABM Sadequr Rahman.
Talking to the correspondent, DC Abdul Matin said a total of 55 stalls of government and non-government organizations were set up in the fair.
The DC also urged all through this correspondent, to visit the fair, to enjoy cultural function and know the development activities being implemented by the government offices in the district to push forward it towards desired development.
Similar fairs were also arranged at other six upazila headquarters of the district at the initiative of the respective upazila administration, the DC added.