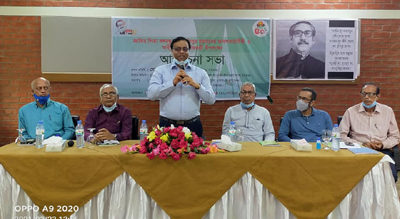 The nation has been celebrating 10- day long programmes on Bangabandhu’s birth centenary and golden jubilee of independence across the country since March 17 and it would continue till March 26.

As part of the programmes, SKS foundation, a local non-government reputed organization, held a discussion meeting at Jaldhara Seminar room of SKS Inn at Radhakrishnapur under sadarupazila in the district yesterday.

Deputy commissioner(DC) Abdul Matin addressed the function as the chief guest and general secretary of Bangladesh Awami League, district unit Abu Bakar Siddique was present at the event as the special guest while SaifulAlam, director of SKS Foundation (development and programmes) presided over the ceremony.

The function was also addressed among others by JahurulQaiyum, senior journalist Abu JaforSabu, KM RezaulHoque and principal of SKS Foundation School and College AbdusSattar.

Besides this, a number of participants also took part in the open discussion session.

The speakers in their speeches said,Bangabandhu fought all his life to alleviate the miseries of the people and he was the inspiration of the country’s Liberation War.

DC Abdul Matin in his speeches said, Bangladesh would move forward on the way shown by Bangabandhu and the doors of impossibility will open one by one.

Bangabandhu overcame thousands of storms and brought freedom which was cherished by the Bengali for thousands of years, the DC added.

A large number people of all walks of life, invited guests and journalists attended the programmes.