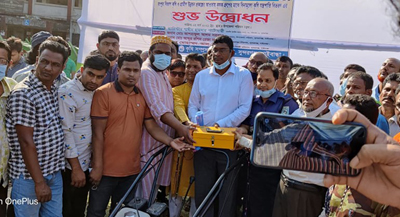 A total of 5400 farmers of Sundarganj upazila in the district got agri-machinery and agri equipment’s from upazila agriculture office yesterday to build a modern and technology-based agriculture sector for becoming a developed country by 2041.

A discussion meeting was also held on the office premises of the upazila town at noon with upazila agriculture officer (UAO) Syed Reza-e MahmudMunna in the chair under Rangpur Division Agriculture and Rural Development Project.

Local lawmaker Barrister ShameemHaiderPatwari attended the function and addressed it as the chief guest and mayor of Sundarganj Municipality Abdur Rashid Reza SarkerDoublu and upazila youth development officer Khademul Islam  spoke at the event as the special guests.

The speakers in their speeches underscored the need for mechanization of agriculture for making it commercialized and a profitable sector.

Local lawmaker Barrister Shameem Haider Patwari in his speeches said There is no alternative to make the agriculture a profitable sector through reducing production cost with the utilization of modern machinery and technologies to become a developed country by 2041.

Putting maximum emphasis on agriculture, the lawmaker said, the government led by Prime Minister Sheikh Hasina has been providing subsidy for the expansion of mechanization in agriculture sector and this subsidy will be further increased in the coming days.

The UAO in his concluding speeches urged the farmers to utilize the machines carefullyand take care it properlyto make the machines durable and to attain the cherished goals of the project.

Later, the chief guests formally distributed the agri machineries and equipments to the selected farmers of 138 groups under the project run by the upazila agriculture office.

A large number of people including upazila level officials, political leaders, town elite and journalists were present on the occasion.