Humanchain to protest attack and vandalism of Hindu homes in Sunamganj 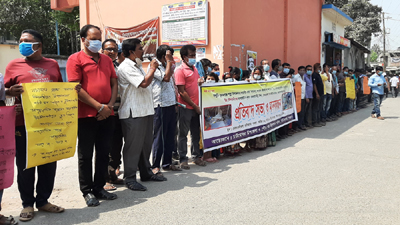 A humanchain and protest meeting hold at Chatmohar in Pabna on Monday morning to protest the vandalism of the attack on a Hindu village in Sunamganj.

The upazila and municipal puja ujjapan parishad organised the humanchain programme at Dolabeditala intersection of Chatmohar municipal headquarters at round 11am on Monday.

Speakers at the humanchain and protest meeting strongly condemned and protested the attack and vandalism in the Hindu village. They also demanded that those involved be arrested and brought under the law and that a peaceful environment be created for Hindus.