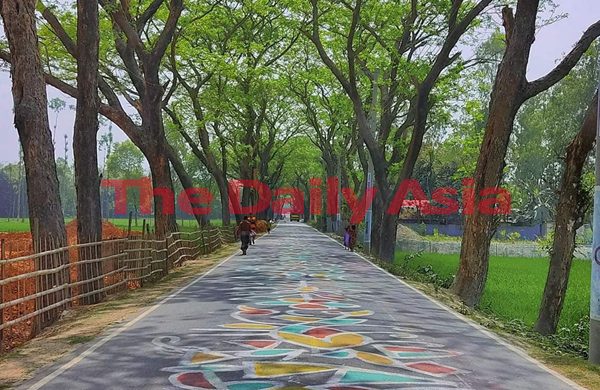 Drawing alpana on 10 km road of the district ended on Friday noon amid much enthuasiasm to the concerned and festive mood.

The slogan of the alpana festival was “Dekhabe Gaibandha, Dekhbe Desh, Record Korbe Bangladesh”.
The longest alpana of the country was drawn on Gaibandha- Shaghata Road from in front of police lines of the district town to Bhanga Mour bazaar of Shaghata upazila in the district. The alpana drawing started on Thursday around 12.30 PM and continued till Friday 10.30 AM without any break. The alpana drawing ended in 22 hours.
Public university students’ Association of Gaibandha (PUSAG)and the students of public medical Colleges have jointly drawn the biggest alpana in the country marking the Mujib Year, officially termed as Mujib Barsho, the birth centenary of Father of the nation and architect of independent Bangladesh Bangabandhu Sheikh Mujibur Rahman, concerned sources said.

President of the association Md. Jeem and general secretary AK Pramanik Partha said to set a record regarding the alpana in the Guinness book is one of the objectives of the alpana festival side by side with presenting Gaibandha to the whole country and the globe.

In reply to a query, they said as many as 1100 students in cooperation with a number of professional alpana artists took part in the alpana festival without any break.

ON Friday morning around 10.30 AM, deputy commissioner (DC) Abdul Matin formally announced the closing of alpana drawing at the gate of Sadar upazila parishad near Banglbazaar of the district town.

Speaking on the occasion, DC Abdul Matin in his speeches said the people of Gaibandha would remember the exceptional task of the PUSAG forever and thanked the organizers for arranging such the initiative. The DC also gave his commitment to stand beside them for their creative works in future. Later, the DC went round the long road where alpana was drawn at the cordial efforts of the students.

Earlier the DC was received by the leaders of the PUSAG with bouquet of flowers. Then the DC opened the road for traffic movement and President of PUSAG Hossain Md. Jeem, general secretary AK Pramanik Partha, executive president Tonmoy Nandi, chief coordinator Chandra Shekhar Chowhan and other volunteers were present on the occasion.

Earlier, deputy speaker of the Jatiya Sangshad and member of Parliament from Shaghata-Fulchhari constituency Advocate Fazley Rabbi Miah formally inaugurated the 10-km long alpana on the road of the district this on Thursday afternoon as the chief guest, sources said.

Talking to the correspondent, President of PUSAG Hossain Md. Jeem, general secretary AK Pramanik Partha, executive president Tonmoy Nandi, chief coordinator Chandra Shekhar Chowhan SAID they had taken preparations to apply to the authorities concerned of the Guinness book to set or break a record about the alpana drawing in the Guinness book side by side with making the Mujib Year and the golden jubilee of the independence and memorable to the people.

The town elite and the people from all walks of life encouraged and inspired them to make their initiative a grad success, they added.