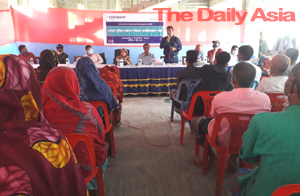 A two-day long briefing sessions on the importance of artificial insemination of sheep ended at separate three spots of the district on Monday through active participation of the enthusiastic farmers and the trainers.

Friendship, a leading non-government reputed organization based in Dhaka of the country organized the briefing sessions for the char farmers who rear sheep on the char land for their livelihood under the Assistance for Sustainable Development funded by Friendship Luxembourg.

The objective of the briefing sessions was to help disseminate high quality sheep to the farmers, earn them economic profit to change their socio-economic conditions through eradicating their poverty, meet the demand of nutrition.

To play positive role in national economy to help build a happy and prosperous country is another objective of the briefing sessions, said Dibakar Biswas, project in charge of Friendship Gaibandha.

On Sunday, an inaugural ceremony was also held at the hall room of Kamarjani Merchants’ High School under Sadarupazila in the district with Md. Kamal Hossain, director of sustainable economic development, Friendship in the chair.

Speaking on the occasion DLO Dr. Md. Masudur Rahman said, the environment of the char land of the district is very suitable for sheep rearing. The DLO also narrated the benefits of artificial insemination elaborately for the participants and urged them to rear sheep at larger scale to change their lots.

Chairman of Kamarjani Union Parishad, Abdus Salam Jakir also spoke in the inaugural ceremony, among others.

The above mentioned upazila livestock officers conducted the sessions there as the resource persons while professor Dr. Farida Yasmin Bari, chief researcher, surgery and obstetrics department of Bangladesh Agricultural University, Mymensingh was the chief patronizer.

More than 200 farmerscoming from different chars of the district participated in the briefing session.