Green ceremonies on the banks of the Jamuna at Saghata; The fate of the farmer is changing 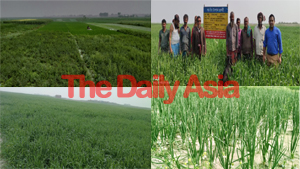 In Saghata upazila of Gaibandha, Charbasi has started an agricultural revolution on the bank of the river Jamuna. People affected by river erosion have started growing various crops on the shelf. The wide shelf is adorned with a variety of crops. After the floods, various crops including chilli, eggplant, onion, coriander, garlic, tomato, carrot, wheat, china, maize, kaun, peanut, sweet potato, lentil, boro paddy are being cultivated in the char soil. And by selling this grain produced in the local market, the farmers who are victims of river erosion are changing their fate day by day.

A few years ago, this madness used to flow in the river Jamuna. At that time, innumerable boats were moving in the river. The shelf that woke up after drying up the river Jamuna is now known as grain store. Char farmers have been busy cultivating crops on the land since the flood waters receded this year. With the depletion of water in the river Jamuna, the farmers started cultivating the land in the fertile char lands anew. Besides chilli, maize and jute, farmers cultivate almost all kinds of vegetables including paddy, wheat, mustard, Chinese almonds, sweet pumpkin, potato, sweet potato, garlic, onion, carrot, kaun, lentil pulses and khesari pulses.

As soon as the dry season came, the farmers took up a crop at home and started cultivating the land to grow new crops again. At one time the people of this region were extremely poor due to river erosion and floods, then this region was called Manga-affected region. At that time, men from poor families used to go to different district cities including Dhaka to work as laborers and women used to collect floating timber from the river and sell it to make a living. These people have started to change their destiny by using the shelf that has arisen in the chest of that river to alleviate the shortage. The women of these families are working hard with their husbands and children to reap the harvest.

Farmers Chaidur, Surutzaman, Abdul Jalil, Bahar Ali and many others, residents of CP Garamar Char in Saghata upazila, said the area was only sandy due to river erosion and floods. The silt layer in the sand chars due to floods every year has now become suitable for crops. Residents of Patilbari Char Habibur Rahman Mir, Ismail Mir, Jobbar Soni, Haran Sheikh and many others said, “This char now has all kinds of crops. We don’t have to go to Dhaka or any other district to make a living.” I don’t have time to cultivate my own char land. There is no shortage of char people like before, now everyone is able to earn good income from the crop.

Sagheta Upazila Agriculture Officer Krishibid Sadequzzaman said, “The Department of Agricultural Extension has started applying advanced technology in agriculture with the dedicated efforts of the government.” Cultivation has also been started in the char areas through technology based improved varieties of seeds. As a result, as the interest of farmers towards farming has increased, agriculture is expanding in the char areas and crop production is also increasing. Greenery is now visible all over the char area. He further said that it would have been easier for the farmers in the char areas to take their produce safely home if the government had set up houses in the chars for threshing and storing grains. The yield would have been higher if the crop had been irrigated using lollipot pumps and tape pipes.