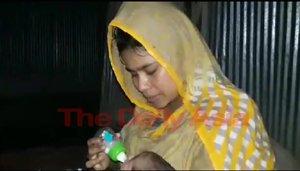 Roxana Khatun, 23, of Sadullapur in Gaibandha has been accused of evicting her mother-in-law for not giving her permission to go home.

Roxana was not allowed to enter her father-in-law’s house despite staying there from Thursday afternoon to 8 pm. Instead, Roxana alleged that her in-laws had divorced her three months ago. When the National Emergency Service called 999 in the evening, the police rescued Roxana along with her newborn from her husband’s backyard in Ghoramara village of Naldanga union in Sadullapur upazila and brought her to her father’s house. His family members, including his father-in-law Mohabbar Ali, have been on the run since the incident. Swami Raju Mia works in a restaurant (food hotel) in Dhaka.

According to police and locals, Roxana Khatun got married to Raju Miah a year ago. A medical examination two and a half months ago confirmed that Roxana had a daughter in her womb, along with her husband Raju Mia and her family. From then on, inhuman torture of husband and mother-in-law came down on Roxana. Violence even if ever committed; The girl was being tortured more than dowry.
Roxana was taken to Salehin Clinic in Rangpur on March 7 when she went into labor at her husband’s house. Roxana gave birth to a baby girl by caesarean section there. After staying in the clinic for four days, Roxana came to her husband’s house in Ghoramara on Thursday afternoon with her daughter. But Roxana was not allowed to enter the house by the family members including the mother-in-law. At that time, the mother-in-law left the main gate of the house locked. Roxana stays out of the house until 8 p.m. Finally, mother Roxana Khatun took her four-day-old baby girl to her father’s house. Roxana is the daughter of Lutfar Miah of Dhaniyarkura village in Sarbananda union of Sundarganj upazila.

Roxana Khatun said that the people of the in-laws’ house including the husband wanted a son. But from the time she found out about the news of her daughter’s birth, her husband and mother-in-law used to torture her in various ways. After the birth of the child, no one actually allowed her to enter her husband’s house. Instead, the father-in-law and mother-in-law informed him that they were going to divorce him three months ago. However, Raju Mia’s mother Asma Begum said on her mobile phone that she had divorced her son Roxana three months ago.

Confirming the matter, Officer-in-Charge (OC) of Sadullapur Police Station Masud Rana said police had rescued Roxana along with her newborn and kept her at her father’s house. No written complaint has been received in this regard yet. Prompt action will be taken if any complaint is received.