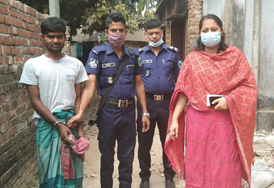 An anti-drug operation was carried out in Khandaker Para, under Sherpur upazila in Bogura on Thursday.

The convicted is identified as Majnu (30) who was arrested with drugs (Gaza) while using drugs during the mobile court.

According to the Narcotics Control Act, 2018, he was sentenced to six (06) months rigorous imprisonment and an additional 5 days imprisonment without pay for non-payment of Tk 500 fine.