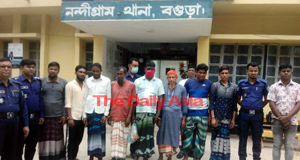 Eight gamblers have been arrested in Bogra’s Nandigram. Police SI Rezaul Karim, SI Shah Sultan and ASI Abul Kalam Azad, under the direction of Officer-in-Charge Kamrul Islam, arrested the gambler along with equipment while he was gambling at Abdul Mannan’s deep tube well in Namuit village in Nandigram on March 10.