Field day on OFSP held at Kamarjani in Gaibandha 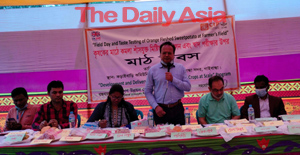 Field day on OFSP held at Kamarjani in Gaibandha. Thrust on production, dissemination of OFSP in farmers’ level.

”The farmers could be economically benefited through farming the variety and change their socio-economic condition gradually side by side with meeting the demand of nutrition particularly Vitamin A deficiency for the mothers and children,” they opined.

They made the comments while addressing at a field day and Taste testing on BARI released OFSP  sweet potato on the ground of Karaibari Community Clinic under Kamarjani union of Sadarupazila in the district on Wednesday.

International Potato Centre (CIP) Bangladesh in partnership with GanaUnnayan Kendra(GUK), a local reputed NGO, arranged the function under the programme of Development and Delivery of Biofortified(DDBio) Crops at scale funded by UKaid in collaboration with department of agriculture extension and BARI.

The speakers in their speeches said OFSP is a climate resilient crop which can been grown on sandy and loamy land and may be incorporated in local cropping pattern and it has the bright scope to farm the variety on the land located on the banks of the rivers here.

Terming OFSP as a great source of nutrition and power house of Vitamin A the speakers urged the farmers to farm the BARI released sweet potato on their land next seasons to get desired output and reasonable price against the crop to be self-reliant economically.

DD of DAE AKM Ruhul Amin in his speeches emphasized for changing food habit and incorporating it in daily food menu and asked all particularly the pregnant mothers and the children to take it regularly to enhance the disease resistance power at their bodies.

Later, the DD formally inaugurated the harvest of OFSP at the land of farmer Balika Begum in the village as the chief guest.

After harvest, the farmers present expressed their satisfaction over the yield as 110 maund of sweet potato was produced from a bigha of land.

A large number of agriculture officials, farmers, NGO activists, and invited guests including journalists were present on the occasion.