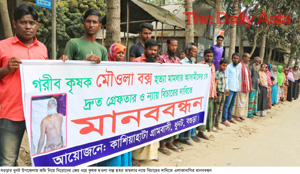 A human chain program has been held in Bogra’s Dhunat Upazila to demand justice for the murder case of farmer Maula Box (55) over a land dispute. The human chain program was organized by the villagers in Kashiyahata Bazar area of ​​the upazila around 12 noon on Tuesday. The deceased was identified as Ashab Ali of Kashiyahata village under Mathurapur union of Maula Box upazila.

It may be mentioned that on January 1, a farmer Maula Box was injured in a clash over land in Kashiyahata village. Later, Maula Box died on January 8 while undergoing treatment at Bogra Shaheed Ziaur Rahman Medical College Hospital. Rezaul Haque, son of the deceased, has filed a case against 13 people including Abul Kalam Azad, son of Jamser Ali of the same village.

Rezaul Haque, son of the deceased, said the accused were threatening in various ways to withdraw the case. They are trying to divert the murder case. Therefore, standardization program has been observed to demand justice.

Abul Kalam Azad, accused in the murder case, said the plaintiff was not threatened in any way. This case is being dealt with through the legal process.