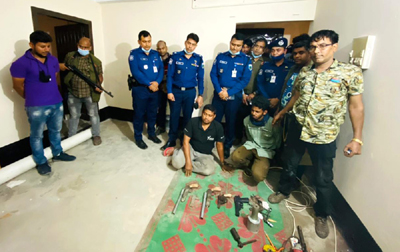 Officer-in-charge of Detective Branch of police (DB) Md. Abdul Hannan said arms dealer Mehedi Hassan Shovon of village Notabaria was operating illegal fire arms factory in underground of the house of his cousin Md. Alam of the village since long.

Acting on a tip off an operation team of police led by additional superintendent of police Masud Alom raided the house at about 3pm on Sunday when the arrestees were manufacturing fire arms the DB OC said.

During the drive police arrested two of them also seized two pieces of one shooter gun, a rival bore and a semi rival bore, also arms manufacturing materials from the spot, he said.

The mastermind of the arms factory Shovon and his cousin Alam went on hiding during the drive the DB OC said. The illegal fire arms factory was operating here since long the OC said adding that the police are investigating the incident.