Char people depend on horse-drawn carriage in Saghata UZ 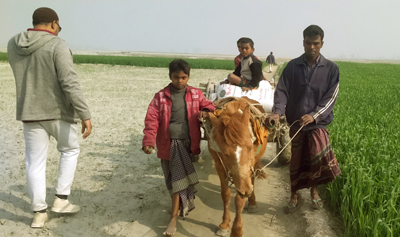 Horse-drawn carriage is only reliable vehicle for thousand char people under Saghata upazila in Gainbandha district.

The produce surplus greens in the rabi season but they could not ability to send them to the distance area due to shortage of connecting roads.

Thousands of families are living in the remote char area with miseries whiling transporting agr-based greens from the area to district headquater.

During the monsoon season, they are seen to transportation the boats. And the only means of transportation in the dry season is the horse-drawn carriage.

The chars surrounded by the river Jamuna farmers of several areas of the upazila are to depend on Horse-drawn carriage to send childrens to school, madrasha and college as there are no concrete roads.

Farmer Habibur Rahman of Gobindpur village under the upazila said, “Horse-drawn carriages are the only means of transportation in this vast char region.”

After harvesting these grains at home, they are sold in different markets of Saghata on the other side of the river using boats and horse-drawn carriages in the area but they don’t get good price.

Amzad Hossain, who owns a horse-drawn carriage in Haldia Char, said horse-drawn carriages were his main source of income during the dry season. He earns Tk 400 to 500 every day from morning to evening. He runs a family of three with this money, he added.

Business man Solaiman said no vehicles were allowed in the char area as communication was cut off. As a result, the people of Char carry their produce and other goods in horse carts.