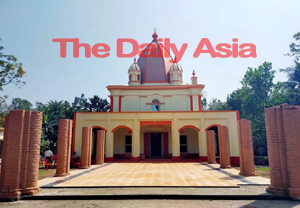 On the occasion of the arrival of the Prime Minister of India Narendra Modi, preparations are being made for the Jessore Shri Temple at Shyamnagar, Satkhira.

Such good news has created a happy atmosphere among the Matua community living in Shyamnagar like other quarters. They are preparing to welcome Modi nationally.

According to various media reports, the Prime Minister of India will visit the Kali Mandir in Jessoresari on March 27. In the meantime, three helipads are being prepared there. Besides, separate security teams from India and Bangladesh have visited the spot. It is learned that they will take all necessary measures for his safety.

There are more than 20,000 people of Matua community in different places of Satkhira district. Among them there are more than 10 thousand people in Shyamnagar upazila alone. Political circles are speculating that Narendra Modi’s visit to the temple will have a significant positive impact on the March 27 West Bengal Assembly elections in India.

Various information is known from history about the establishment of Jessoreshri Kali Mandir in Shyamnagar. Satish Chandra Mitra, the author of ‘History of Jessore Khulna’ has given various information about the establishment of this temple. It is said that during the reign of Raja Lakshman Sen from 1560-80, he was ordered to build a temple in Ishwaripur area in a dream. It was also instructed to close the temple after its construction. Due to the long closure, the temple became forested. At that time Dhumghat in Shyamnagar was the capital of Pratapaditya, one of the 12 Bhuiyan kings of Bengal. At that time King Pratapaditya saw a ray of light coming out of the forest. He then ordered the temple to open.

In the meantime, when the temple was opened, the bust of Charubhairab was found there. From then on worship started there. According to history, the youngest daughter of a skilled king was named Satibala. She was a worshiper of Mahadev from birth. At one point she voluntarily married Mahadev. The skilled king had a strong objection to this. Mahadev came in the presence of a skilled king on one occasion. But Mahadev did not introduce Daksha Raja as his brother-in-law. He was extremely insulted. Later he started Daksha Yajna. Satibala and Mahadev were not invited. Satibala felt insulted by this. Shortly after, Satibala passed away.

Upon receiving this news, Mahadev came down quickly from Kailas. He cut off the head of the skilled king, cut off the head of the goat brought for sacrifice and put it there and made the skillful sacrifice. Later, he took his dead wife Satibala on his shoulders and went to Mount Kailash and planned to destroy Brahmashu in anger and grief. On hearing this news, Brahma and Narayan decided to remove the body of Satibala from Mahadev in order to cool him down. According to him, Satibala was cut into 51 pieces and rotated with a trident. A piece of it fell in the village of Ishripur in Shyamnagar upazila of Satkhira district of Bangladesh. The Jessoreshri-Kali temple was established there. Other fragments spread to different countries including Kalighat in West Bengal, Afghanistan, Pakistan.