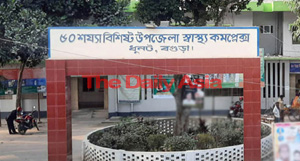 Her husband Majnu Mia has fled leaving the body of a bride named Dulali Khatun (18) at Bogra’s Dhunat Upazila Health Complex (Hospital). The deceased was identified as Dulali Khatun, daughter of Chandu Fakir of Charpara village in Dhunat municipality.

Police recovered Dulali Khatun’s body from Dhunat Upazila Health Complex around 12 noon on Sunday and took it to the police station. The body is being sent to Bogra Shaheed Ziaur Rahman Medical College Hospital morgue for autopsy.

According to the police and family sources of the deceased, Majnu Miah, son of Anwar Hossain of Belkuchi village in the same area, had a love affair with Dulali Khatun about a year ago. At one stage, Dulali Khatun pressured Majnu Mia to get married. But Majnu refused to marry Dulali due to lack of family consent. In this situation, Dulali took position at Majnoor’s house about 4 months ago to demand marriage. As a result, Majnu Mia was forced to marry Dulali Khatun.

Fazlul Haque, brother of the deceased, said, “I got the news and reached the health complex and found out about my sister’s death.” However, I cannot say at this moment what caused his death.

Dr. Ashraful Kabir, a doctor at Dhunat Upazila Health Complex, said Dulali was brought to the hospital dead. However, signs of hanging the body have been found.

Dhunat Police Station Inspector (Investigation) Zahidul Haque said the cause of death of the bride was being ascertained after recovering Dulali’s body and sending it to Bogra Shaheed Ziaur Rahman Medical College Hospital morgue for autopsy.