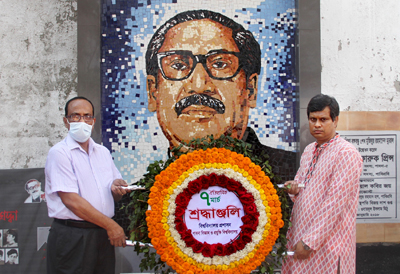 The family of Pabna University of Science and Technology (PUST) celebrated the day of Bangabandhu’s historic March 7 speech with due dignity and in a festive atmosphere.

In a press release sent by e-mail from the university on the occasion of March 7, Vice-Chancellor Prof. M Rostam Ali said in a message that the speech of Father of the Nation Bangabandhu Sheikh Mujibur Rahman on March 7 was a speech to change history.

At the end of the tribute treasurer professor Md. Anwar Khasru Parvez said that the father of the nation has spoken about the people of Bengal all his life. Through his speech on March 7, he brought unarmed Bengalis on one stage.

Deans of different faculties, hall provosts, chairmen of different departments, teachers, officials, staff and students were present at the occasion. The programme was conducted by professor of History and Bangladesh Studies Md. Habibullah. At the end of the ceremony, prayers were offered for the forgiveness of Bangabandhu’s soul.