Speakers at the memorial meeting of journalist Mozakkir 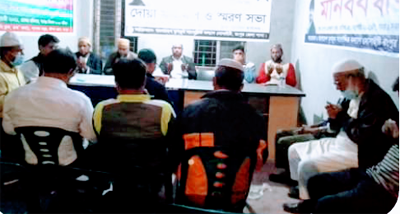 Trinamool journalists work to cover the country and the nation in the media by overcoming various obstacles. The risk to life comes when it comes to news coverage. Journalists are being killed on various issues including politics. Even when sick journalists die, no one in the family of a journalist keeps them informed.

That is why a demand has been made to form a welfare fund including life risk insurance for journalists as part of the central program organized by the Rangpur district branch of Bangladesh Trinamool Sangbadik Kolyan Society (BTSKS) after Maghrib on Saturday, a prayer mahfil and remembrance meeting was held to seek forgiveness of the departed soul of late journalist Burhan Uddin Mozakkir of Noakhali,

Later, the late journalist Burhan Uddin conducted the munajat seeking forgiveness of the departed soul of Mozakkir and happiness, peace and prosperity of the country and the nation. Imam Mao: Siddiqur Rahman, journalists of various print and electronic media, people of different professions including social and cultural were present at the presentation of Kaderia Jame Mosque.
It may be mentioned that a group arrested journalist Borhan Uddin Mozakkir for filming a clash between two groups of a political party on February 19 in Kompaniganj Chaprasirhat area of ​​Noakhali. Cameras and mobile phones were snatched and shot at random. He was taken to the hospital in critical condition and later succumbed to his injuries at around 10 pm on Saturday 20 February.