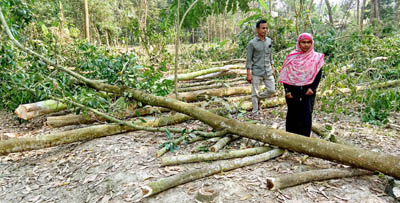 A businessman named Milon Hossain has been accused of cutting down trees in his garden in Bogra’s Dhunat upazila due to family feud and previous enmity over land.

The affected businessman lodged a written complaint against his opponent at the police station on Thursday morning.

According to the complaint, Milon Hossain, son of Hafizur Rahman of Panchthupi village of the upazila is a businessman. He planted Belgian and eucalyptus trees on the 9th century land in the neighboring village of Pirhati about 8 years ago. Nowadays the trees have become quite valuable.

Meanwhile, Milon Hossain and Ratan Mallick, son of Ambia Mallick of Pirhati village, and his son Ashiq Mallick have been at loggerheads over family matters and land. In this situation, Ratan Mallick and Milon Mallick started cutting Belgium and Eucalyptus trees from Milon Hossain’s garden on Thursday morning.

On hearing the news, Milon Hossain, the owner of the tree garden, went to stop him and his opponents tried to beat him up. At that time, the opponents cut down 16 Belgian and 2 eucalyptus from the garden. The victim trader has lost about 50 thousand rupees. Attempts were made to contact Ratan Mallick but no statement was received.

Sub-Inspector (SI) Nuruzzaman Sardar said the spot was inspected after receiving the complaint. The cut trees of the garden have been confiscated and handed over to a local elder.

A memorandum meeting will be held with both the parties at the police station next Monday. If no agreement is reached, necessary legal action will be taken.