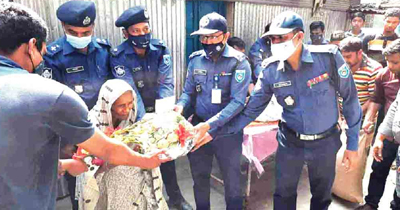 District police led by superintendent of police (SP)Muhammad Towhidul Islam yesterday stood beside by a boy with disability and his grandmother with various edible food items including rice, daal and oil on humanitarian ground.

Locals sources said, Sadik, a boy with by born disability was born in a poor family at Katlamari village under Fulchhariupazila in the district more than ten years ago. After he was born his mother got married another person leaving him as a result, his grandmotherRahimaKhatun used to takes care his grandson Sadik but she along with grandson had been passing her days and nights with hardship for want of food due to poverty. Sadik was kept in the yard of their house by tying his legs with the ropes all day long so that he could not move anywhere.

At one stage, the sufferings and hardship stories of grandmotherRahimaKhatun and her grandson Sadik were published in the social media. To see it, the guardian of the district police SP Muhammad Towhidul Islam expressed his eagerness to visit the house of RahimaKhatun.

Accordingly, the SP visited the house of RahimaKhatun at Katlamari on Wednesday. Going there, the SP talked to Rahimakhatu, and inquired about the health condition of Sadik. The SP hearedRahimakhatun and other family members with patience and gave RahimaKhatun a package of edible food to help pass their critical time without troubles. The SP also assured them of providingmore help and assistance from the district police.

Talking to the daily asia, SP Towhidul Islam said, the district police took an initiative to conduct the social welfare works on humanitarian grounds side by side with maintaining peaceful law and order situation in the district.

Accordingly, the district police stood beside them with food items to mitigate their sufferings due to poverty, the SP concluded.