Gang rape of a teenager in Thakurgaon, 4 arrested 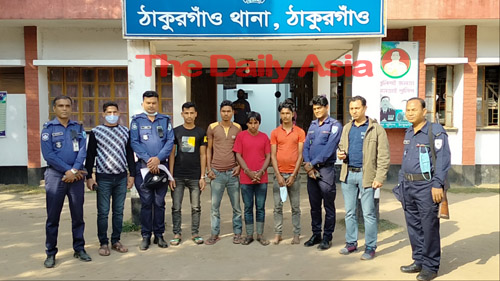 Gang rape of a teenager in Thakurgaon, 4 arrested Police have arrested four people in connection with the gang-rape of an 18-year-old girl in Thakurgaon.

Police have arrested four people in connection with the gang-rape of an 18-year-old girl in Thakurgaon.

They were arrested from Jamalpur Union and Ranishankail Upazila of Sadar Upazila on Monday morning.

The arrested are Babul, 19, son of Abdul Jalil of Uttar Maheshpur village in Jamalpur union of Sadar upazila, Sohel Rana, 20, son of Khalilur Rahman of the same area, Ramzan Ali, 19, son of Shamsuddin of Nuntor village in Ranishankail upazila and Moslem Uddin, son of Moslem Uddin of Jharbari Mohammadpur village. (22).

It is known that a month ago, Babu alias Babul met the girl through his mobile and a love affair developed. Later, at 3 pm last Saturday, he went to his aunt’s house to visit Babul on the Kashiadanga Bridge. There, 4/5 strangers including Babul and his accomplice Sohail abducted the girl and her sister. Later, Bhagat Gazi kept the girl in a box at a chicken farm and in a nearby mango orchard, Babu alias Babul and his accomplice Sohail and others raped the girl in turn and fled.

Thakurgaon Sadar Police Station Officer-in-Charge Tanvirul Islam confirmed the incident. The OC said the accused were arrested immediately after receiving the complaint. The case is under investigation. Police are continuing their operation to arrest the other accused.