Long queues of voters in Bogra municipal elections since morning 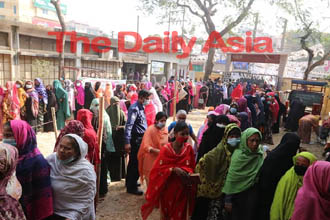 Yesterday, February 26, 2021, Bogra Municipality elections are being held through electronic voting machines (EVMs) in 113 centers in 21 wards. Long queues of women voters have been seen in the suburban and extended wards of the municipality since Sunday morning. However, in the first hour and a half, voter turnout was relatively low in some centers of the city. Candidates are also satisfied with the overall voting environment. Voting starts at 8 am. It will continue non-stop till 4 pm. 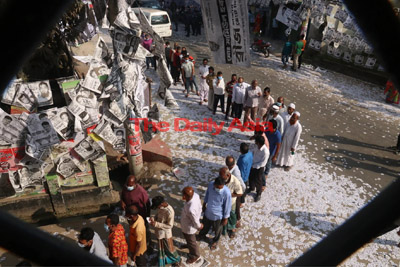 Voters say they have not seen such an orderly and conducive environment in any other election since the 2008 national election. Some have called the vote a vote to restore public confidence in the electoral system.

At around 8 in the morning, there was a long queue of male voters at the Seujgari Government Primary School in Ward No. 8 of the city. On the other hand, a long queue of women voters was seen at Jamilnagar Muktijoddha Technical College in the same ward at 8.15 am. Voters here expressed frustration over the slow pace of voting in the EVM. Record attendance of women voters was also seen in Rajapur Union Parishad Center in Ward No. 19.

Belail Government Primary School in Ward No. 14 has been flooded with male and female voters since morning. Shahinur Islam and Laila Begum, the voters who came here to cast their votes, said that after almost a decade, it seems that they have really cast their votes. I have not seen such a fair and festive voting environment in any other election since the 2008 elections.

At around 9 in the morning, the Yakubia Girls’ High School in Ward 8 was largely devoid of voters. Voting officials were spending lazy time here. The presiding officer said that the voter turnout will increase with the increase of the time.

BNP-backed mayoral candidate Rezaul Karim cast his vote at Kalitala Hasnajahan Girls’ High School in the city at 8.30 am. Expressing satisfaction over the overall voting environment, he said, “So far, voting is going on in a fair environment in all the centers.” If the environment is like this, the victory of the sheaf of rice is assured.

Awami League-backed boat candidate Abu Obaidul Hasan was staying at the Town Government Primary School Center around 9.30 am. He said in the first light, he has not voted yet, but he is happy to see the overall voting environment. He said the vote is being fair and free. He is ready to accept the result.

Members of the law enforcement agencies are working to ensure a fair and peaceful vote. Bogra Superintendent of Police Ali Ashraf Bhuiyan told Prothom Alo that 4 armed policemen and 6 Ansar members are on duty at the general center, 5 at the risky center.