Again the liveliness is on both sides on Aricha-Kazirhat ferry 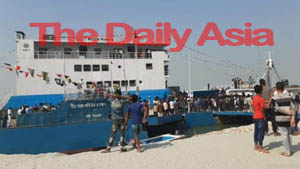 Again the liveliness is on both sides After about two decades, Aricha-Kazirhat ferry started plying.

After overcoming all fears, the long-awaited Aricha-Kazirhat ferry service has finally started. Begum Rokeya, Birshreshtha Matiur Rahman and Ketki will run three ferries on this route.

For so long, millions of people in 16 northern districts, including Pabna, Natore, Rajshahi and Chapainawanganj, have been traveling from Kazirhat to Dhaka in speedboats and engine-driven shallow boats at risk of their lives. It takes up to 7-8 hours to reach Dhaka by road via Bangabandhu Bridge. It is possible to reach the destination in just 4/5 hours by river. The ferry can be crossed in one to one and a half hours.

Although there is a risk of life in crossing these vehicles on the river, these ordinary passengers have to pay extra fare on the road and bridge. That is why low-income people were crossing the river in trawlers at the risk of their lives.

It is learned that the ferry service was shifted from Aricha to Paturia on February 22, 2001 to reduce the distance of the Padma Jamuna. From then on, the traditional Aricha-Kazirhat ferry started losing its splendor. Hundreds of small and big businesses of thousands of people were shut down. However, these two ghats have been recaptured.