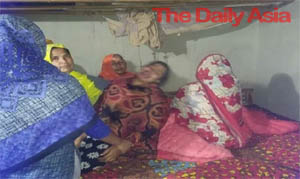 Police have recovered the decapitated body of a student named Mahbuba Akter Mary in Badarganj of Rangpur.

Her body was recovered from Buzruk Hajipur Gachhuapara in Bishnupur Union of Badarganj Upazila around 8pm on Friday (February 26).

The deceased was identified as Mary, 18, daughter of Super Menhazul Haque of Ramnathpur BU Dakhil Madrasa. She was a student of Waresia Dakhil Madrasa. Meanwhile, the police are investigating whether it was murder or suicide.

According to locals, relatives and police sources, Mary’s mother Nurnahar screamed when she saw Mary strangled in her house on Friday afternoon. At her screams the neighbors came forward and saw her throat cut. Mary fainted in front of them in a short time.

Monira Sultana, Mary’s younger sister, cried out, “Suddenly I don’t understand what happened to my sister.”

Her mother Nur Nahar said, ‘I heard my daughter screaming in the bedroom and I saw blood gushing from her throat. After a while the girl became numb. My daughter has been ill since childhood due to epilepsy. That’s why she can commit suicide. ‘

Badarganj Police Station OC Habibur Rahman said, “The matter of the recapitulation is mysterious. The body has been recovered and sent to Rangpur Medical College Hospital for autopsy.

Meanwhile, Rangpur Additional Superintendent of Police Sifat E Rabban visited the spot. Crime scene members including PBI are working on the spot to unravel the mystery.