Vandalized in Kahalu injured-4 including a woman 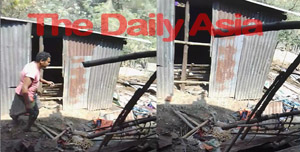 In Mirpara, Birkedar, Kahalur, four people, including a woman, were injured in a beating and vandalism of a house on Friday afternoon due to a land dispute.

At that time, when my father and brother went to rescue my mother and uncle, they hit them with the native weapon in their hands and seriously injured them. At that time they vandalized the doors and windows of our house and caused a loss of about 2 lakh rupees. Ambia Begum (45), Josna Begum (55), Abed Ali (43) and Ainul Islam (18) were seriously injured in the beating. Among them, Ambia was admitted to Dupchanchia Upazila Health Complex due to her critical condition. A case is being prepared at Kahalu police station in this regard.