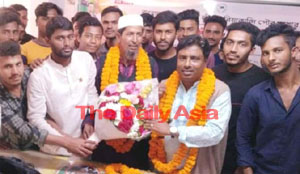 The tri-annual conference of the Municipal Awami League has been held at Sariakandi in Bogra. At the conference, Korban Ali and Mofizul Islam Patal were elected president and general secretary for the third time and scored a hat-trick.

At the end of the first session, Abdul Khaleq Dulu, the chief guest in the second session, announced the dissolution of the previous committee. In the end, Korban Ali was re-elected unopposed as president and Mofizul Islam Patal as general secretary. Korban Ali and Mofizul Islam Patal were elected president and general secretary for the third time at the Sariakandi Municipal Awami League conference and scored a hat-trick.