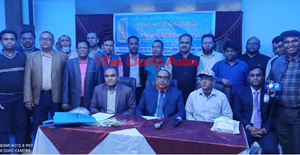 The new committee of Janata Bank Limited Officer Welfare Council Bogra Area has been announced at a function held at Midas Chinese Restaurant in Jaleswaritala, an elite area of ​​Bogra city on Tuesday evening, February 23. Babu Pawan Chandra Modak was made the president and Khandaker Anwarul Islam the general secretary of the 47-member committee.

Apart from this, newcomers and promoters have been given reception at the bank. Deputy General Manager (DGM) of the bank Haruna Rashid addressed the function as the chief guest under the chairmanship of Babu Pawan Chandra Modak. Retired officers of the bank Shahid Kabir, Matiur Rahman, Jinnatul Alam were the invited guests. Under the management of Senior Principal Officer (SPO) Chanaul Haque, among others were General Secretary of Officer Welfare Council and Senior Principal Officer (SPO) Khandaker Anwarul Islam, Chanaul Haque (SO) of the Bank, Sultan Mia, Tapas Kumar, Jihadul Islam, Mashkur Rahman.

At the end, the leaders of the Officer Welfare Council had a photo session with the Deputy Chief General Manager (DGM) of the Bank, Haruna Rashid, who was the chief guest at the event. In the end, the Chinese restaurant hosted a high quality dinner.