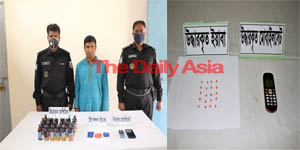 1. On Monday (February 22, 2021) at 3:20 pm, based on a tip-off, the company commander of the special company of the battalion, Assistant Superintendent of Police Muhammad Mohiuddin Miraj, led a vigilante expedition of RAB-12’s special company in Sirajganj district. Two drug dealers along with 20 Yaba tablets were arrested after a temporary check post was set up on a dirt road next to the tree garden of Mohammad Qayyum Akand in the middle of Tarash Bazar. Besides, 01 mobile phone used for buying and selling drugs was also seized from them.

2. On Monday (22nd February, 2021 AD) at 09.20 pm, on the basis of secret information, a vigilante expedition team of RAB-12 Special Company led by Assistant Superintendent of Police Muhammad Mohiuddin Miraj of this battalion was formed. In a raid in front of the main gate on the south side of the house of Anwar Sheikh, father-deceased Nurul Islam, 01 drug dealer was arrested along with 24 bottles of Fencidil and 360 pieces of Yaba. Besides, 02 mobile phones used for buying and selling drugs were also seized from him.