Child theft from hospital in Sirajganj 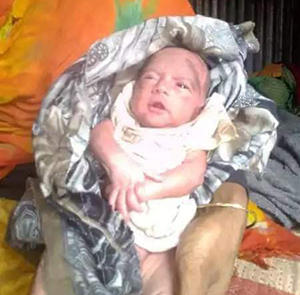 The incident took place at noon on Tuesday (February 23) at the children’s ward of the 250-bed Bangamata Sheikh Fazilatunnesa Mujib General Hospital.

The stolen child is the son of Choyan Islam of Vadalia village in Lahiri Mohanpur union of Ullapara upazila.

Shishu Fahim’s mother Sharmin said, I was admitted to the hospital 7 days ago due to cold. I went out to wash the baby’s clothes on Tuesday afternoon. Later I came and saw that my son Mahim was not there. After much searching it was not found. “My son got lost due to the negligence of the doctors and nurses in the pediatric ward,” he added.

Sadar Hospital caretaker said. Md. Saiful Islam said that the matter has been informed to the police.

Sirajganj Additional Superintendent of Police (Sadar Circle) Snigdha Akhter said efforts were being made to rescue the stolen child.