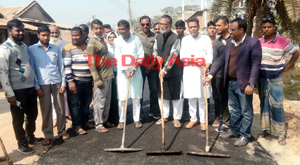 Carpeting work has been inaugurated on the paved road from the railway station on the Adamdighi-Abadpukur road in Bogra to Kusumbi Bridge. The carpeting work was inaugurated by the chief guest Upazila Parishad Chairman Alhaj Sirajul Islam Khan Raju on Monday noon.

Note: Under the Rural Road and Maintenance Project, the 1.1 km road from the railway station of Adamdighi-Abadpukur road to Kusumbi, which has been implemented by LGED at a cost of Taka 1 crore 16 lakh, is being paved.