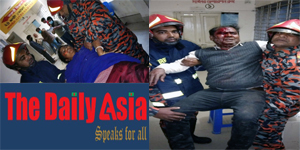 A team of fire service rescued the injured and took them to the hospital. The accident took place near Shibpur Fire Service of Adamdighi Upazila on Bogra-Naogaon Highway at 6 am on Monday. The deceased was identified as Biswas, wife of another injured Dipankar Biswas of Harishpur village in Abhaynagar upazila of Jessore district. The deceased were identified as Bishi, manager of Majhihat Grameen Bank branch in Shibganj upazila of Bogra and her husband Dipankar Biswas, branch manager of Buriganj Grameen Bank in the same upazila.

The injured have been shifted to Adamdighi and later to Bogra Shaheed Ziaur Rahman Medical College Hospital. CNG twists and turns.

Adamdighi Fire Service team leader Mostafizur Rahman said Dipankar Biswas of Harishpur village in Abhaynagar upazila of Jessore district and his wife Shilpi Biswas worked for Grameen Bank in Shibganj upazila. They were on holiday at home on Sunday morning, boarding a border train, getting off at Santahar station, reserving a CNG and going to work. When the CNG reached the Adamdighi Fire Service at 6 am on Monday, a Dhaka-bound coach pushed the CNG from behind and the CNG twisted and fell on the side of the road. A team of quick fire service reached the spot, rescued them and took them to Adamdighi Hospital.