Three Students Were Died By Motorcycle Accident In Bogra 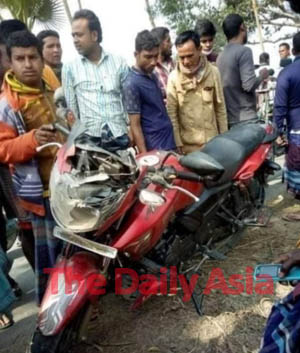 Abdullah 15, Shakib 15, and Sumon 15, of Maidanhatra union in Shibganj upazila of Bogra were died by a motorcycle accident at Prabhurampur in Panitla of Gobindaganj police station.

The accident took place at 10 am on Thursday (February 18) at the junction of three trees at Beurgram Road in Prabhurampur between Panitla and Baneshwar in Rajahar Union of Gobindaganj Upazila in Gaibandha District.

According to the family sources of the victims, Abdullah along with Shakib and his cousin Sumon went to Baneshwar Sakib’s aunt’s house on the same motorbike around 3 pm on Wednesday, February 18. Abdullah, Sabik and Sumon hit the milestone of the road when they reached the intersection of Beurgram Road in Prabhurampur between Panitla and Baneshwar of Rajahar Union. Immediately the riders of the other motorcycle quickly left the scene.

Upon receiving the news, the police and their relatives rushed to the spot and rescued Abdullah and Sumon in critical condition. After taking Abdullah to Gobindganj Hospital and Sumon to Bogra Medical, they died at Gobindaganj Police Station. As there was no complaint from the families of the victims, Gobindganj Police Station Inspector (Investigation) Afzal Hossain handed over the bodies of Abdullah and Sumon through a bond.

On the other hand, after Shakib’s body reached home, the police of Shibganj police station came to see the bodies of the victims. At that time, SI Nazmul and his accompanying force, who were in charge of the Beat Police in Maidanhatra Union, actually said that the accident took place in Gobindaganj police station, so we have come to offer our condolences to the families of the victims.

Thousands of women and men came to see them at a glance as three members of the union were killed at the same time and they too shed tears with the bereaved families. The incident has cast a shadow of mourning over the area.