Exemption of teacher for giving low marks to student in BRU 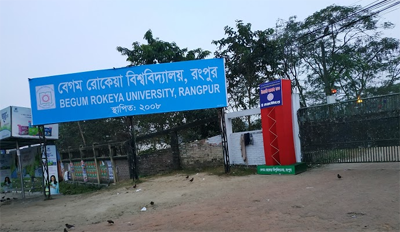 Assistant Professor Moutussi Roy of Begum Rokeya University has been exempted from the examination activities for allegedly giving low marks to the students of the English department. The decision was taken at the 76th meeting of the university’s policy-making forum (syndicate) held on February 12.

The teacher will not be able to attend any examination related to the department until further notice. The vice-chancellor of the university has confirmed the matter. Sarifa Salwa Dina.

According to department sources, on February 8, the second  semester of the fourth year (2014-15 session) of the English department published the 50th Continuous results of the subject number 402 in the subject of ‘Transparency Studies’.

After the results were released, the students of that batch accused the course teacher Moutusi Roy of giving low marks and threatened mass suicide and movement by sending short messages on his mobile phone. The teacher made a general diary (GD) at Tajhat police station at midnight that night after the students threatened to commit mass suicide. The students protested in front of the department the next day in view of the low marks and GD.

In the context of the student movement, the administration has invited Associate Professor Golam Rabbani of the Department of History and Archeology to investigate the incident. The Academic Council formed a three-member committee comprising Hasibur Rashid and Tania Tofaz, head of the chemistry department. Following the recommendation of the inquiry committee, the teacher recommended the release of Moutusi Roy from academic activities.

At the same time, the issue of applications for re-evaluation of students’ results also came up in the recommendations”Two teachers of the department, Ali Raihan Sarkar, Kashfia Yasmeen Anba and the vice-chancellor, consulted with the vice-chancellor of the university in the wake of threatening to commit suicide and movement by sending a text message on my mobile phone,” said Motusi Roy, a teacher who was exemptedI took PA Abul Kalam Azad with me to the police station.However, she said she did not know about the exemption from the test.