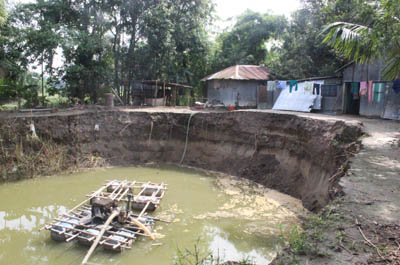 Sand extraction with shallow machines is causing threat under Sonatola upazila in Bogura for a long time as the authority concern don’t heed in the matter.

There have been allegations of free extraction of sand from underground with shallow machines from densely populated areas. As a result, houses in the area are under threat. However, despite the local administration’s ban on sand extraction, the equipment has not yet been removed.

According to the complaint, Moniruzzaman (Sukul), son of late Mahbubur Rahman Majnoor of Padmapara village in Pakulla union of Sonatala upazila of Bogura, has mentioned in his written complaint that a man named Mohammad Ilias Akand Bulu is extracting sand from a populated area with a shallow machine. As a result, more than a hundred houses in the vicinity are under threat.

Locals further said that as a result of lifting sand with an Ilias Akand Bulu shallow machine, the area concerned has become 40-50 feet deep. Which is surrounded by houses. Locals fear that natural disasters such as earthquakes or major storms and floods will flood nearby homes.

When contacted last Thursday, Elias Akand Bulu said he would build a house on the roadside by lifting sand from his own land with a shallow machine.

Local Abdul Momin, Sablu Mia, said that as a result of sand extraction from the populated area with the help of shallow machines, there is a risk of demolition of houses in the area. Complaints have been lodged with the Deputy Commissioner, Upazila Nirbahi Officer and Sonatala Police Station.

OC of Sonatala Police Station Rezaul Karim Raza was contacted and said that sand mining has been banned following complaints from locals.

It is to be noted that the local victim community has demanded appropriate punishment against the extractors including confiscation of sand extraction equipment by the mobile court.