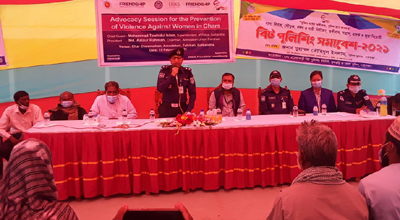 Speakers in a function observed that beat policing could play a pioneering role to maintain law and order situation and to check all other social crimes including violence and repression against women and children.

“Beat policing, a concept, has been launched by the police to free society from all sorts of crimes through strengthening the bilateral relations between the police and the public in general”, they said.

They made the observations while addressing a function on beat policing gathering on the ground of Char Chowmohon Govt. Primary School of Fulchhari upazila in the district on Monday.

Beat policing committee of Erendabari union of the upazila arranged the function in cooperation with Inclusive Citizenship Sector of Friendship, a leading non- government organization of the country.

Superintendent of police(SP) Muhammad Towhidul Islam attended the function and addressed it as the chief guest.

The speakers in their speeches said the system of beat policing driven by the collaborating efforts of both police and community in order to provide sustainable security to the society is called beat policing.

SP Muhammad Towhidul Islam in his speeches underlined the need for boosting the relationship between the police and common people and for exploring the opportunities of beat policing for lasting peace everywhere in the society.

The SP also sought all-out support of the communities to halt the women rape and other violence and repression against women.

Highlighting the importance of freeing the women and children from all sorts of violence and repression the SP called for a concerted effort of all government and non-government entities concerned to curb the violence.

Additional SP Abu Khayer said, police will work and fight against all sorts of social crimes including women rape and all other violence and repression against women and children.

Public support has become crucial to make the society free from all the existing social crimes, he added.

For quick response to the crime spot, the patrol boat or car of that beat area are used to reach that spot, he added.