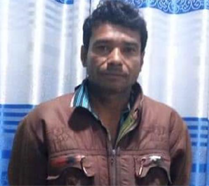 Police have arrested Ashraful Islam, 42, of Pirganj in Rangpur along with Yaba. At that time 86 pieces of yaba were recovered from him.
On Monday (February 15) morning, he was sent to jail through a court showing his arrest in a regular case.

Ashraful Islam is the son of Sekendar Ali of Abdullapur area of ​​Pirganj upazila. According to police sources, Pirganj police raided the Abdullapur area on Sunday night on the basis of secret information. At that time drug dealer Ashraful was arrested. After searching his body, the police recovered 86 pieces of yaba. At that time, his associates and buyers fled.

Pirganj Police Station Officer-in-Charge (OC) Suresh Chandra said Ashraful was arrested along with 86 pieces of yaba in a special operation. Regular cases have been filed against him and he has been sent to jail

Attack on journalist’s family in Thakurgaon