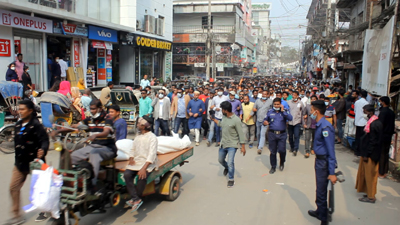 A union level Awami League activist was shot dead by assailants at Ataikanda-Bunepara in Pabna sadar upazila on Sunday night.

The deceased was identified as Amirul Islam, 30, son of Muntaj Bepari of Kathulia village under Bharara union in the upazila also an activist of Awami League and a construction worker.

Awami League leaders and activists on Monday noon carrying the dead body brought out a protest procession to protest the killing of Awami League activist Amirul Islam and demand arrest of the killers.

The protest procession left the district Awami League office at around 1pm and marched around the main roads in the town.

It may be mentioned that Amirul was shot dead by the terrorists of the opposition over supremacy of the area in Bharara union of Pabna sadar upazila at around 8 pm on Sunday.

The OC said no case had been registered till 4 pm when the report was written.