Advocacy session on prevention of violence against women held in char 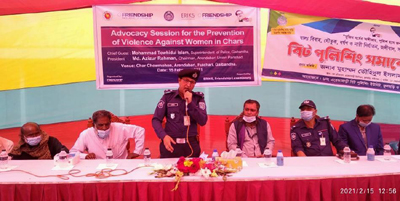 Speakers in a function here today underscored the need for halting all sorts of repression and violence against women and children to ensure a gender-balanced and equity-based society.

“An emphasis should be given to come forward with positive attitude and work together and come forward to forge social resistance against the violence against women and children”, they also said.

They came up with the comments while addressing an advocacy session on the prevention of violence against women including children on the premises of Char Chowmohon Govt. Primary School under Erendabari union of Fulchhari Upazila in the district on Monday noon.

Superintendent of Police (SP) Muhammad Towhidul Islam attended the function and addressed it as the chief guest.

The speakers in their speeches said, building social awareness among the community people, especially parents and teachers, has become an urgent need for prevention of child marriage and dowry for substantial and sustainable reduction of violence against women.

SP Muhammad Towhidul Islam in his speeches said, the government alone or any single organization is not capable to free the womenfolk from violence and repression, so community participation is very important in this regard.

The SP said overall national development could be possible through ensuring education and all other fundamental rights of the children coming from the poor and underprivileged families.

Physical and mental development of children could also be possible through protecting them from violence and deprivation, he added.

The SP also thanked the Friendship and its officials to arrange such the function for the char dwellers to make them aware about domestic violence to build a better society.

The SP also elaborately discussed the beat policing activities for the char people to maintain and improve law and order situation in the chars.

A write up composed by founder and executive director of Friendship Runa Khan, was also read out in the function in the write up founder and executive director of Friendship said, due to various grounds including lack of education and good communication system and other facilities the char dwellers are in backward position and pass their days and nights facing more hardships and difficulties.

To bring the backward and under privileged hard to reach char dwellers of Gaibandha and Kurigram districts the organization has been working relentlessly since 2002 for their overall development including socio economic condition.

She also sought whole hearted cooperation of all the stakeholders of the society to bring the char dwellers deprived of the state run facilities under the mainstream of the development.