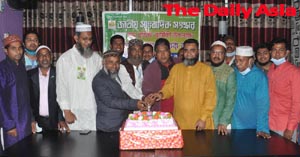 The 39th founding anniversary of the National Journalists Association has been celebrated in Bogra with great enthusiasm. The cake was cut at the end of the discussion meeting at the luxurious Max Motel in the Mofiz Pagla corner area of ​​the city.

Other speakers, including the chief guest, said that the National Press Agency has been on its feet for 39 years. He further said that this journalist organization speaks for the welfare of the people and the realization of the rights of journalists. Journalists are working through writing to take the country forward. Bebek journalists of the society play a leading role in the overall field. Finally, there were calls for the punishment of those who killed and tortured journalists across the country.