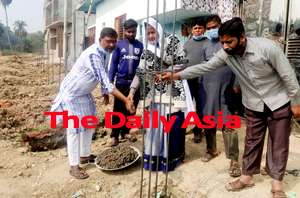 Manju Ara Begum, president of Bogra Zilla Parishad, president of Upazila Mahila Awami League and headmaster of the school, inaugurated the construction work of the wall at a cost of around Tk 5.5 lakh on Friday morning.

Adamdighi Sadar Union Parishad Chairman and General Secretary of Upazila Juba League Zillur Rahman, General Secretary of Adamdighi Press Club Benazir Rahman, Member Journalist Abu Muttalib Moti, Teacher Delwar Hossain, Nur Islam and other dignitaries were present on the occasion. Note; Under the LGSP-3 project of Adamdighi Sadar Union, construction work of this wall has been started on the north side of the huge playground of this school at a cost of Taka 5 lakh 30 thousand.