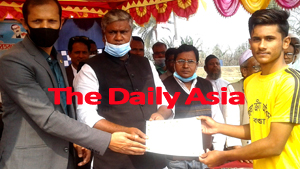 Certificates have been distributed to the male and female football players participating in the month-long football training at Sandira and Santahar Stadium in Adamdighi.

The certificate was distributed at 11 a.m. on Friday, February 12 at the Sandira football ground in the upazila. On the occasion, a discussion meeting was held under the chairmanship of Sandira Star Club President Nur Islam. Dr. Nazrul Islam, football coach Alamgir Hossain, Hossain Ali and others. At the end, certificates were distributed among 25 male and 25 female football players who participated in the month-long football training organized by Bogra District Action Office.