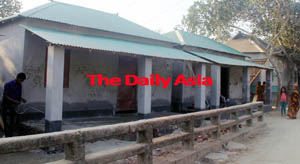 A case has been filed against six people, including the Dhunat Upazila Executive Officer (UNO) of Bogra, Aceland and the chairman of the Upazila Parishad. The case was filed in the Bogra court on the charge of occupying the land of private owners and constructing a gift house for the homeless.

The other accused in the case are Dhunat Upazila Social Service Officer, Gopalnagar Union Parishad Chairman and Gopalnagar Union Deputy Assistant Land Officer. The court took cognizance of the case and issued a show cause notice to the defendants seeking a reply within 14 days.

The plaintiff’s lawyer TM Khoda Box confirmed the information and said that the plaintiffs in the case were Akbar Ali, son of late Mojibur Rahman of Gaziabari village in Gopalnagar union of the upazila, his brother Mozaffar Ali and mother Rahima Khatun and six others from the same family.

According to the case sources, Akbar Ali and his family members have been living in Ghaziabari Mouza (Dag No. 951, JL No. 62, CS Khatian No. 138, MR Khatian No. 181, DP Khatian No. 69) for at least 100 years. ) Occupying 25 percent of the land. UNO has occupied the 13th century land and built the Prime Minister’s gift house for 6 homeless families there. The house was inaugurated on January 20.

Family members, including Akbar Ali, Mozaffar Ali and Rahima Khatun, the main owners of the land, said the land belonged to our ancestors. We have been occupying this land for one and a half hundred years. Suddenly the UNO, the chairman and the union land officer came and said that the land belonged to Khas Khatian. With this they started building houses on the land. When we asked for papers, they said, “We don’t need to see papers.” Go to court and show it. Then we did not find a way to file a case in the court on January 26 (No. 22/2021). The court saw our documents and issued a show cause notice against the defendants.

Residents of the village, including Abdul Hai, Yar Ali, Meher Ali, Dudu Mia and several other elderly people, said, “We are witnesses. Akbar Ali’s grandfathers have been occupying the land for more than a hundred years.” Suddenly the people of the government forcibly built the houses here without hearing anything.

Dhunat Upazila Nirbahi Officer (UNO) Sanjay Kumar Mahanta said the plaintiffs had been occupying government land illegally for a long time. They could not show any valid documents of this land. For this reason, the gift house of the Prime Minister has been built there. They have filed a case in the court with false RG. The reply to the show cause notice received from the court will be submitted in due course.