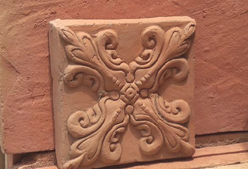 The global epidemic Corona, the aggression of unscrupulous traders and the tyranny of middlemen are on the verge of extinction. At one time this industry was number one in Satkhira’s economy but today it is on the verge of destruction.

The owners and workers associated with this industry are in dire straits after losing their jobs.
Despite the touch of modernity in almost all parts of the country, the tile factory is not modernized, the cost of production does not go up, the lack of goodwill of the government and the lack of easy loans are some of the reasons for the destruction of this industry. However, only a handful of factory owners are still trying their best to keep the industry afloat.
One of them is Gostha Chandra Pal, son of the late Ramakrishna Pal of Murarikati village. He said they have been making tiles since 1947. Their ancestors were also involved in this industry.

Despite getting the highest degree in the country’s conventional education system, Gostha Chandra Pal is still holding on to the profession as a caste profession. He said that the factory owners have earned around Tk 12 to 13 crore by exporting tiles abroad in 2019. He thinks it is a big contribution to the development of the country’s economy.

Gostha Chandra Pal said that about four thousand workers directly and indirectly work in about forty tile factories here.  Tiles are made and sold for six to seven months a year. The tali making season usually starts from October of the year.  Moves until May-June.  The rest of the time it is rainy season so tile cannot be made. They usually make three types of tiles. Roof tiles, wall tiles and floor tiles are among them.

These tiles again come in twenty to forty types depending on the design and size. In all, one hundred and twenty types of tiles are made in this village.

Each tile has the same name. Square among them. Rectangular, Step Tiles, Hexa Gonar, Scotting Proven Saleh etc. are notable. The price of each piece of tile ranges from five rupees to one hundred rupees. Square tiles are commonly used by foreigners to decorate their walls.

To decorate the floor of the house there is a Provencealeh in the shape of flowers. The price of a piece of Provencal is Tk twenty five to thirty. Thus, the price varies according to the design, structure and size of each tile.  Although the price is cheap, their beauty, quality and durability are incomparable.

Artists have created circle tiles to decorate the house. A set with 4 circle tiles.  A set of circle tiles costs forty to fifty rupees. Gostha Chandra Pal further said that these clay tiles of Satkhira are exported to Dubai and Europe through Mongla port. Some tiles are processed from Dubai and then go to different countries in America.  Attempts are currently being made to capture the French market.

In response to a question, he said that these tiles are made by the artisans with the touch of their skillful hands without any machine or instrument.  The prepared tile is dried in the sun and then burnt in the furnace or pan.  Sixteen hours is a special rule to burn fifteen.

The size of the tile is more or less the same as the size of the burn if there is a change due to burning.  The quality of the tile is not good. Tile is usually burnt once a month.  Replying to another question, he said the government would be able to develop the country’s economy by earning crores of Taka from this industry if it gets government help, cooperation and patronage. This industry can open new horizons of possibilities in poverty alleviation.

Highlighting some of the obstacles and problems in the development of the tile industry, he said the factory owners in the area are not united. The result is a single price. The moneylenders buy the rest of the tile and do not pay the bill on time. The global epidemic, the aggression of unscrupulous merchants and the tyranny of middlemen are almost extinct.
Tile production first started in Murarikati and Sripatipur areas of Kalaroa upazila of Satkhira. Later, forty factories were set up in phases in a few more villages in the vicinity, but now it has been reduced to only ten to fifteen.
It is known that tile construction started in 2000 in Kalaroa.

At that time an Italian businessman named Raphael Aldon came to Bangladesh. He started making tiles in Narayanganj after visiting different parts of the country. But the soil there was not suitable for making tiles, so he returned to the country.

When Rafailo Aldon returned, his Bangladeshi representative, Ruhul Amin, continued to search for soil in various parts of the country to make burnt clay tiles. At one stage he came to Kalaroa in Satkhira and found a suitable soil for making tiles. At that time only tile (local name ‘Khola’) used for camping was made in Kalaroa.  Basically, he can understand by looking at this tile that it is possible to make exportable tile with the soil here.

So Ruhul Amin, owner of Cara Export Import Pvt. Ltd., told the story of the possibility of exportable tiles made of burnt clay of the sails of Kalaroar. That start. From then on, tiles of different designs were made. Initially, the tiles were exported to Italy. Due to this, the area of ​​Kalaroa gradually came to be known as ‘Italinagar’ and the burnt clay tiles became known as ‘E-tiles’.

Initially in Bangladesh this tile was used only in house tents but in Italy this tile was used not only on the roof but also on the floor and walls of the house to enhance the beauty of the house. This ‘e-tile’ used for home beautification has caught the attention of many countries including Germany, Dubai, Malaysia, South Africa, England. Ship exports to these countries began. Through the seaport of Mongla, clay clay tiles are being exported to various countries in Europe and America.

But that era of tile exports is now only a memory. Where earlier 400 container tiles were exported per year, now it is 100. The price of tile has also come down. Small tiles are being sold at Tk 5 to 8 per piece due to the violence of middlemen. The production cost is five and a half rupees per piece.

On the other hand, large tiles are being sold at a price of fifty to one hundred Taka per piece, which costs about forty-five to ninety Taka per piece. And because of the strong syndicate of unscrupulous traders, small factory owners are moving away from this tile business.
“This industry is our source of livelihood,” said Fatema Khatun, a tile factory worker. I do tile trimming, brushing, picking, painting. I get only two hundred Taka as daily wage. We are somehow surviving on this. “Once the tile factory closes, we will be finished,” said Fatema Khatun.

Worker Ruhul Amin said the same thing. He said, working in a tile factory from morning to evening, I get Tk four hundred.  The family runs with great difficulty. How can we survive without a tile factory?

Anisur Rahman, executive director of Satkhira Palli Chetna Sangstha, a tile buyer, said the tile industry in Kalarora is a tradition of Satkhira district. The quality of tile is much better than tiles.  The tile remains intact for a hundred years. It does not easily catch salt. The price is also low. Long lasting. Nice to see you too. But it is now on the verge of extinction. This industry needs to be protected. He sought the intervention of the government to protect the industry.