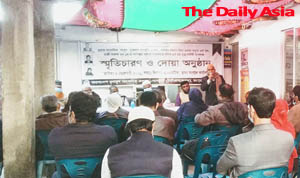 A meeting and prayer mahfil has been held in memory of four late journalists of Rangpur district. The event was organized by Bangladesh Trinamool Sangbadik Kolyan  Society (BTSKS) on the evening of February 08 at the organization’s Shapla Chattar office.